Primal Calling DLC for Solasta Crown of the Magister is the latest Downloadable content that releases with a set of free base game updates without having to purchase the DLC. Purchasing the Primal Calling will unlock new Classes for players to choose from.

Unleash your wild side with the Primal Calling DLC!
Buying this DLC unlocks two new classes (for a total of 6 new subclasses), one new ancestry and one new background.

Solasta's also getting a large update for free!
Whether you decide to get this DLC or not, the Tactical Adventures crew will be rolling a free update nonetheless!

How do I download the Solasta Primal Calling DLC

The Primal Calling DLC along with all other DLC content and Bundles is available for purchase on the Steam Website.

The Solasta Soundrack comes with 23 pieces of the Original Sountrack including songs from Caer Cyflen, Coparann and Aer Elai

Additional Character Creation options and backgrounds were made available during the Primal DLC to further expand into the DnD universe. This allows veteran players and fans of the tabletop game to immerse themselves into previously loved characters and campaigns, and allows them to further customize their characters and builds to experience the game in a new way. This includes the following new features:

Offspring of humans and orcs, half-orcs often have a history of violence rather than romance. Rejected by both their parent's families, they tend to rely on strength to get on in life.

Born in the Marches, you were raised and trained to survive the harsh and perilous environment. You had few friends and no education - though you know the true worth of friendship, the kind that keeps you alive. 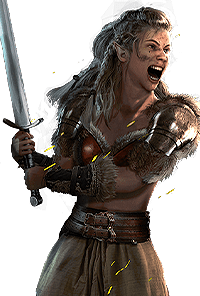 "Barbarians are fierce warriors from the edge of civilization. Their battle range makes them dangerous combatants." 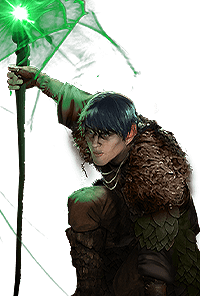 "Druids are part of an ancient order dedicated to its nature. Thier powers and spells are attuned to animals, plants and the elemental forces."

Each of the added new Classes would be accompanied with their new set of Subclasses as well. There will be four designated subclass per class.

Path of the Berserker

The Path of the Berserker is a path of good untrammeled fury, slick with blood. As you enter the berserker's rage, you thrill in the chaos of battle, heedles of your own health or well-being.

Path of the Magebane

Path of the Stone

Barbarians following this path draw their strength form their connection to stone. They are known for their doggedness. They never give up in the face of adversity and thrive in hostile environments.

It is an open secret that Barbarians of the Path of the Claw are the descendants of an old clan that mingled with dragons. Whenever they enter a rage, their ancestry comes rushing out and takes over their senses, allowing them to perform incredible feats of power.

Circle of the Land

The Circle of the Land is made up of mystics and sages who safeguard the ancient knowledge of the Old Faith. As a member of this circle, your magic is influenced by the land where you were initiated into the circle's mysterious rites.

Circle of the Kindred Spirit

At the beginning of time, there was harmony between animals and sentient beings. Some of them even forged an unbreakable bond, melding tow minds and souls in two bodies so that the two bodies shared their bond. This ancient bond has been preserved in the Circle of the Kindred Spirit, an order of druids preserving this sacred bond.

Druids from this circle draw their strength from the winds. As the Cataclysm raged, the connection druids felt to nature frayed But no so for the Circle of the Winds. They felt the mana currents carried by the winds and through them a connection to nature. Through this, they were able to protect from the worst of the cataclysm-born depredations.

Some say that druids from the Circle of Balance are gentle healers, while others tell of merciless executioners. The truth is, both are right: nature giveth, and nature taketh away.