The Dungeon Maker in Solasta: Crown of the Magister is a brand new in-game building tool that enables players to create their very own dungeons, and share them with other players. The Dungeon Maker is an editor that provides fundamental elements such as rooms, traps, monsters, and treasures, for players to arrange and connect together into their own journey. If the player desires, they can even connect their own dungeon with other dungeons to form a mega-adventure. This in-game editor serves as the primary means for Solasta players to enjoy user-generated content, and will be released in a Beta state with the game's official launch. As the game receives more updates, it will be progressively improved and expanded with more features.  This page serves to include the details, mechanics and information related to the Dungeon Maker. 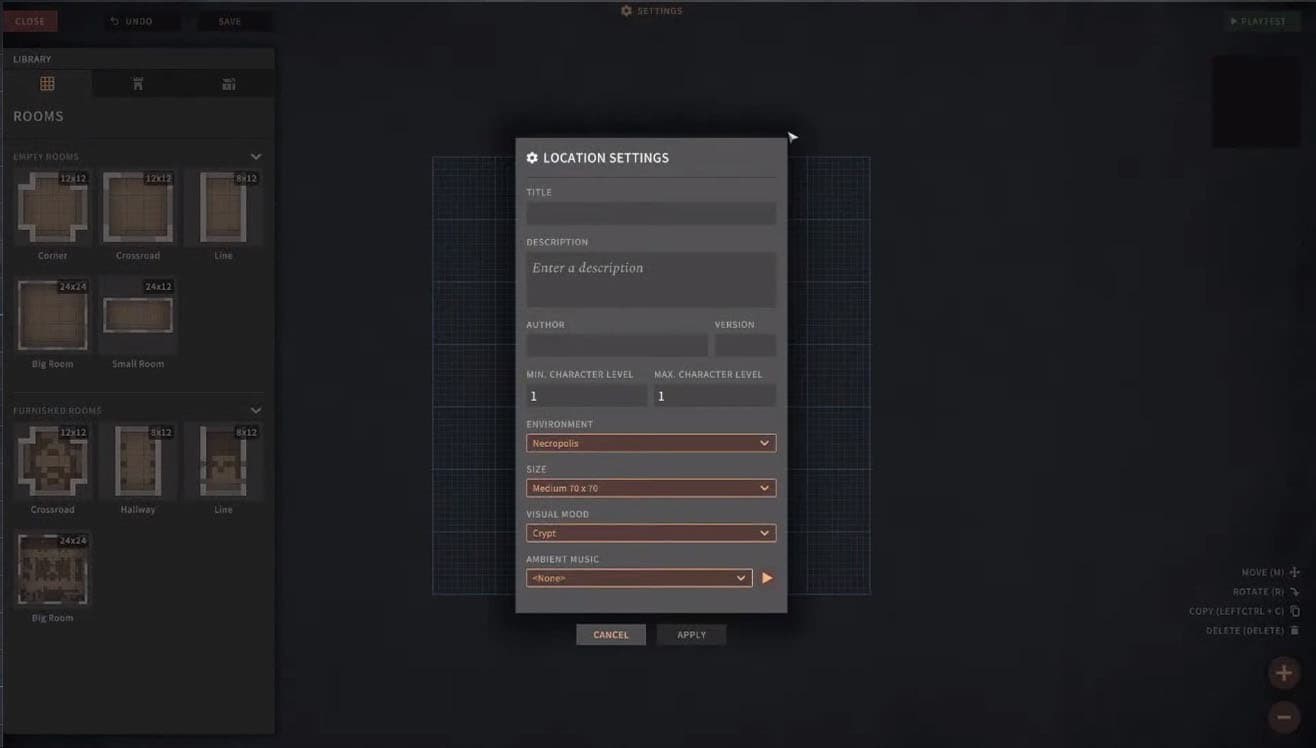 The initial set-up is accessed through the Location Tab in the editor. To begin creating a personal dungeon, the player first inputs basic information such as the title, description, author, and a required base or cap level for entering the dungeon. The player shall then continue on to determine the base environment of the dungeon, its size, visual theme (e.g: Crypt), and ambient background soundtrack. Note that in the beginning stages of the game's release, only three visual moods (Crypt, Inferno and Strange) and one environment (Necropolis) will be available, and more choices will be progressively added with ongoing updates.

The Dungeon Maker provides an array of core elements for players to assemble at their full discretion. These building blocks are tools that inspire creative freedom, and enable the process of materializing a personal, epic adventure. These core elements include different types of Rooms, Gadgets, and Props, and the limitless combinations of these components will determine the final product. 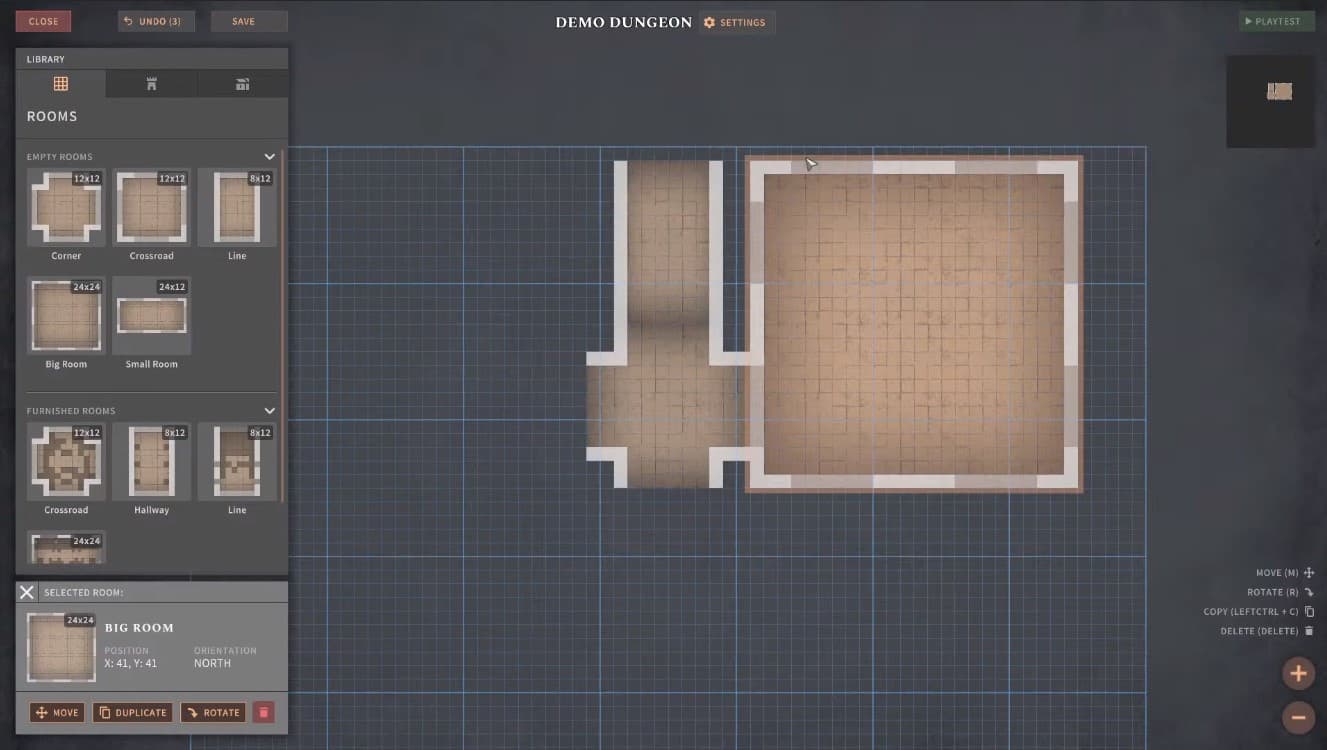 Rooms are the fundamental, structural components players will assemble together to create the complete dungeon map. They are viewed as floor plans in the Dungeon Maker, and come in various geometric blocks. The types of rooms used, and how they are sequenced, will dictate the maximum quantity of Props and Gadgets, as well spatial experience of a player's dungeon. There are 5 different types of rooms - the Big Room, Small Room, Corner, Crossroad, and Line. Each of these rooms come in an empty version and a furnished version. The only rule when assembling rooms is that they can only be connected together on sides with openings, which will become doorways (whether to insert a door there is up to the player, but this rule is to ensure that all rooms are accessible structures).

The Big Room is the largest room available. It a 24 x 24 units square, featuring 2 openings on each side, offering a total of 8 possible doorways, making it an ideal center hall. The furnished version includes 8 Mausoleums, various walls and lighting, arranged by default.

The Small Room is a 24 x 12 units rectangular space, exactly half the size of the Big Room. It features 2 openings on its long sides, and one on its short sides, resulting in a total of 6 openings. Currently, there is no default furnished version of the Small Room, however players may customize the Empty Room with Props and Gadgets.

Corners and Crossroads are 12 x 1 units small squares featuring 1 opening on each side, covering half the space of a Small Room and one forth that of the Big Room's. They are ideally used as intersections as they feature 1 opening towards each direction, and the Corner specifically is built in the shape of a cross-intersection.

The Line, which is the narrowest of all blocks, features a 8 x 12 units area, with a total of 2 openings, 1 on each of its short sides. It takes up around half the size of a Crossroad, and are best suited for transitional corridors leading from one room to another. 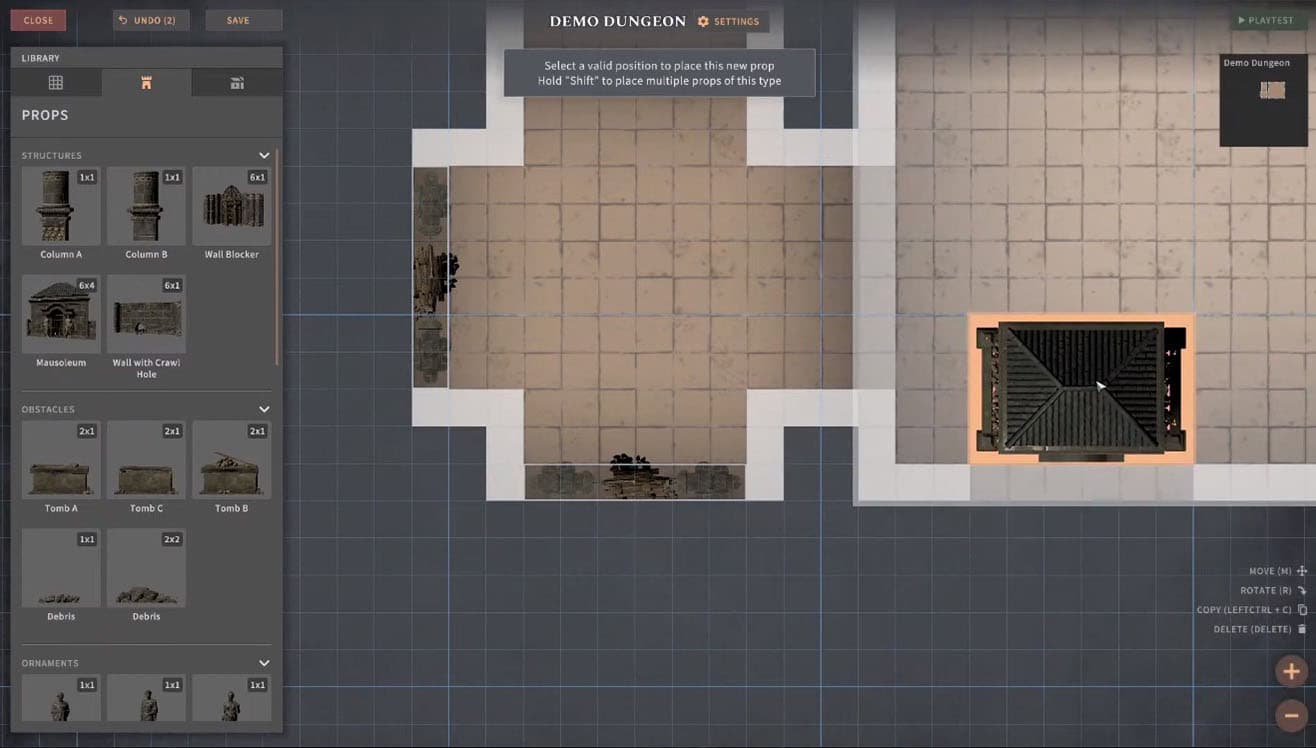 Props in Solasta's Dungeon Maker refer to inanimate objects placed around the dungeon to define space within Rooms. These include Furniture, Barriers, Structures, Obstacles, Ornaments, Openings, and Lighting. The placements of these elements are best used to control the duration it takes for parties to advance through the dungeon. Elements such as debris and walls are great for directing players towards different paths, or used in conjunction with interactive Gadgets, such as Traps.

At the current stage, the only furniture available is the 1 x 1 units stone Bench. It can be used in conjunction with the Campfire from the Resting Gadgets to assemble a resting area.

Barriers are essentially fences and railings that outline areas and paths across different Rooms. There are currently 5 types of Guardrails available in the Dungeon Maker.

Structures are neutral objects used primarily for managing space, and secondarily as decorative tools. Players may choose from 5 different types of structures - Column A, Column B, Wall Blocker, Mausoleum, and Wall with Crawl Hole. Tools such as Wall Blocker and Wall with Crawl Hole determine the transition from one Room to another, while the Columns and Mausoleum make good dividers, as well as hiding places for Loots.

Obstacles include a few variants of medium-height objects, namely Tombs and Debris, that display minor challenges for players to overcome in order to proceed.  Often placed in openings between Rooms.

The Wall Blocker is the currently the only choice for Openings in Props. Much like Obstacles, it presents as a minor challenge for players to overcome before proceeding to the next room.

Lighting in Props are different types of installations keep areas illuminated by default. The three types of lighting are Fire Basin. Candelabra, and Wall Torch.

Ornaments in the Dungeon Maker include various types of Statues, a Vase, and a Chain, used for thematic purposes, adornments, or connection to the dungeon's Lore. 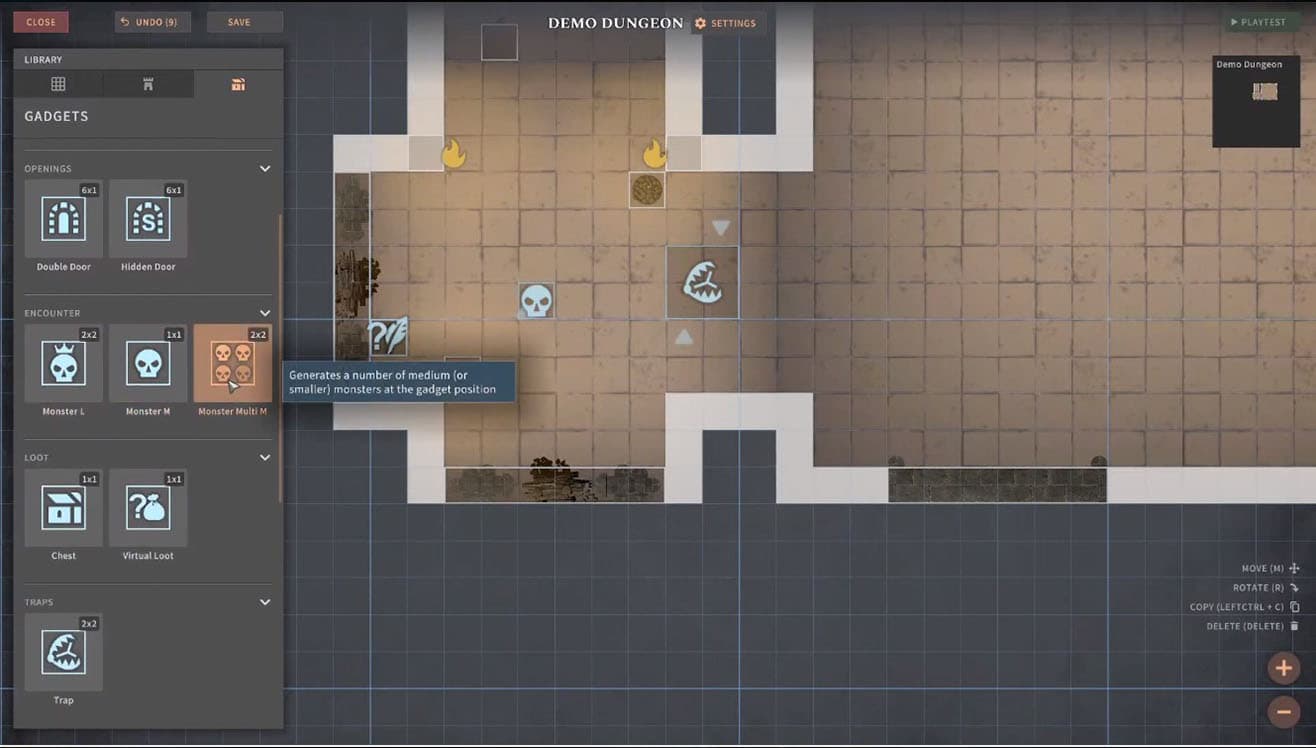 Gadgets in Solasta's Dungeon Maker feature an intensive range of interactive elements that yield responses based on players' actions. It includes interactive Lighting, Openings, Encounters, Loots, Traps, and Lore. The placement and sequencing of these Gadgets will compose all of the interactive content players are going to experience in the dungeon.

Interactive Lighting currently come only in the form of 1 x 1 units Interactive Torches (wall-mounted). Players interact with these torches either via Spells such as "Sparkle" or other means, in order to illuminate the respective area in the dungeon.

Openings refer to the openings available in each of the Rooms, and the type of doors installed in them. There are currently two types of 6 x 1 units doors players can install: the Double Door, and the Hidden Door. Players may then choose to whether leave these doors locked or unlocked by default.

By far the most sought after core content, Encounters refer to the Monsters found within the dungeon. There are currently 3 sizes of monsters available, Monster L (e.g: Minotaur), Monster M (e.g: Acolyte), and Multi Monster M. Players can also choose deploy any of the existing monsters available in Solasta, and also decide whether monsters from different areas spawn together or independently.

Traps refer to a set unit of area that triggers a consequence when coming into contact with players. There is only a 1 x 1 unit trap available at the moment in the Dungeon Maker, but 7 different effects can be chosen for the trap, such as Collapsing Roof, Death Glyph, Ground Spikes, etc. Players can also manually adjust the perception and disarm difficulty.

Lores are appearing texts that trigger by player actions. These come in two types, a Lore Area which triggers the prompt upon entering into an area, or Virtual Lore, which is triggered by interacting with an object. These text are completely written by the player, which could be content regarding the dungeon's backstory, functions, riddles, and other others.

Navigation are signs placed around the dungeon to guide the party in and out of different rooms in order to maintain a clear sequencing of events. They are primarily used to lead players from one destination point to the next. At the moment, only and Entrance and Exit navigations is available. Each dungeon must have at least one entrance and one exit. Different entrance and exits are then paired with each other via a "link" to make individual journeys or paths in the dungeon.

Resting refers to elements placed in the dungeon for parties to replenish and fast forward in-game time. 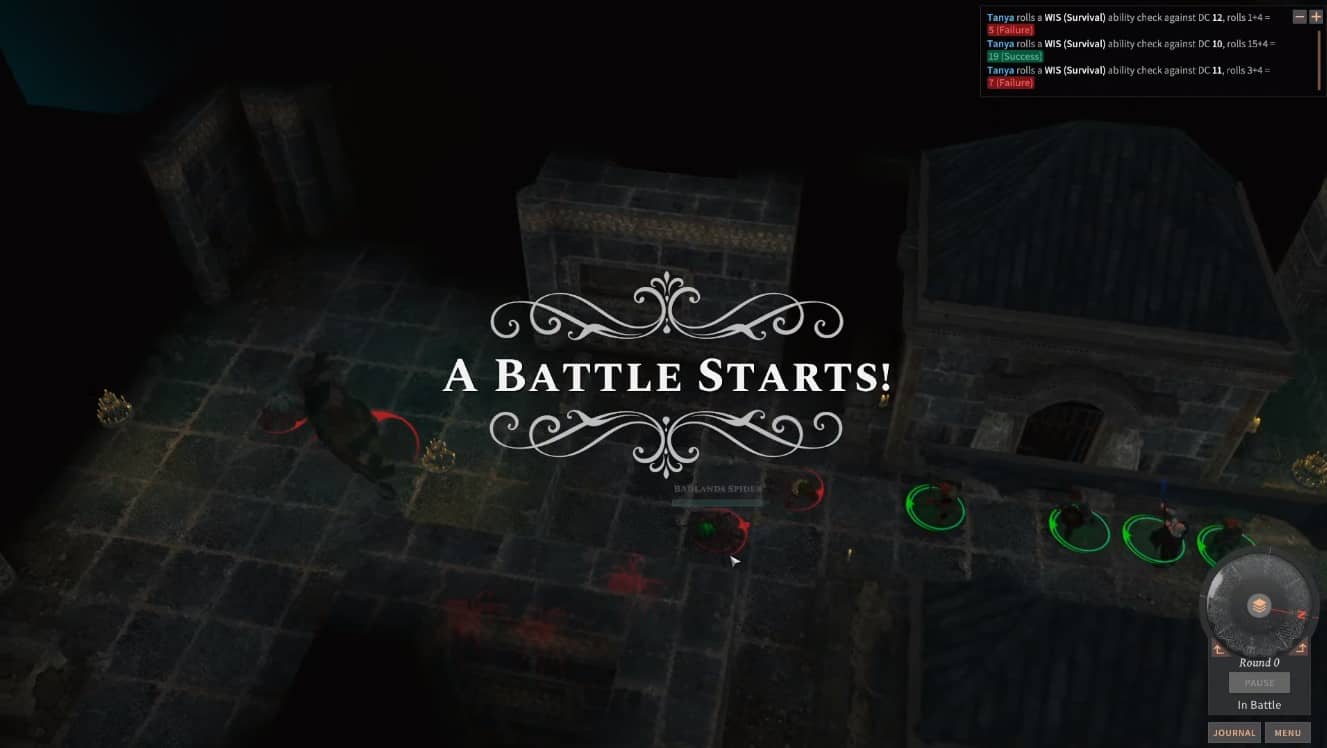 Players may save their progress to exit the editor to experience their own creations at any time to determine if more content needs to be added or modified. Further more, players can even dungeons with each other to create mega-labyrinths and potentially endless content. As the game continue to progress with updates, advanced content such as player generated quests, additional themes, and new elements will be added into Solasta's inventive Dungeon Maker.