Abilities in Solasta: Crown of the Magister are based on the fifth edition of Dungeons & Dragons which was implemented in 2014 and is the latest version of the famous pen & paper RPG. D&D uses a system that involves the rolling of a 20 side dice called a d20 to resolve encounters in scenarios in the game world. Ability scores define where your character excels. They are Strength, Dexterity, Constitution, Intelligence, Wisdom, and Charisma, each with a value between 3 and 20. Ability scores can be generated by several methods, either randomly or using a point system. This page features the various abilities in Solasta: Crown of the Magister.

Ability Scores is the step in Character Creation that determines your scores for each ability. High scores increase this abilities' effectiveness and become one of the key features of a character's build. Players can try to balance out their builds and optimize them for their character Classes and also consider the classes of each party member and the team. How these scores are determined are done with two methods, Dice Rolls and Point Buy.

Dice Rolls introduce an original DnD experience, allowing players to roll a 20 side dice. This set can be rerolled. Scroll over the reroll option and it will read, Reroll 6 ability scores using 4d6 and keeping the three best rolls. There is no limit as to how many times you can reroll the dice before allocating them to your desired Abilities. After rolling, you may then Drag and drop the rolls on to each ability cell. A Standard Array will give you a predetermined set of balanced numbers. 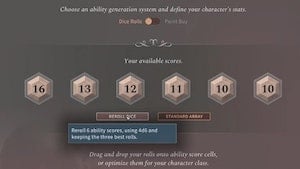 The Point Buy system is unqiue to the online DnD experience, allowing players to further modify their build by being able to customize each ability score. With this mode selected, plus and minus markers will appear next to each score allowing you to increase or decrease. This will affect the overall Points Pool in order to balance Abilities and to ensure there is not build that is overpowered. You will have a total of 27 points to distribute amongst your Abilties. 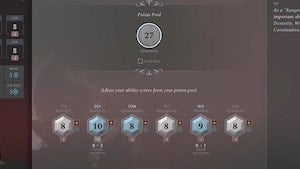 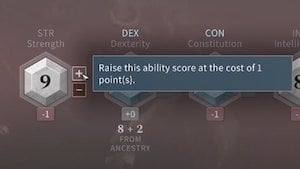 How to Optimize your Abilties to your Class

When creating your build and adjusting your Ability Scores, take note of the modifiers which are the additional numbers that will appear just below each die. As you roll the dice, the game will tally up the die numbers and it will include the final modifier below, so it is recommended for them to remain at a 0 if now a positive number. 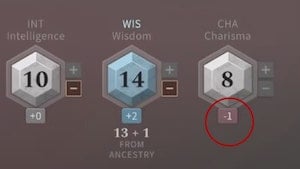 Skills and Abilities in Solasta

These Abilites will then further affect Skills checks that will occur during gameplay. These skill checks will require a successful dice roll to succeed in the specific task related to the skill. For example, Persuasion is a Charisma skill check required when interacting with other NPCs in order to influence someone or a group of people with tact in order to also hopefully avoid further conflict. The skills tied to these abilities can be found below:

Strength measures bodily power, athletic training, and the extent to which you can exert raw physical force.

Intelligence measures mental acuity, the accuracy of recall, and the ability to reason.

Charisma measures your ability to interact effectively with others. It includes such factors as confidence and eloquence, and it can represent a charming or commanding personality.