Manacalon Ruin is a Location in Solasta: Crown of the Magister. Solasta: Crown of the Magister is set a thousand years after a catastrophic Cataclysm resulting in the birth of new young nations around the affected areas along with the destruction of others. These regions and nations are where players will discover ruins and forgotten dungeons, encounter new foes and characters, and embark on different quests.

According to the survivors at Caer Lem, this is where their scouts were exploring before the Soraks attacked. Perhaps you will find some trace here of these legendary Timarian monsters.

You have learned that this old tower was probably the home of a powerful Manacalon wizard.. maybe even a Master of the Arcaneum. Im a hidden room, you found a mysterious Crown guarded by a group of Soraks.

The Legacy Council was not convinced of the existence of Soraks. After investigating the survivors of the Caer Lem Outpost attack. They say this is the place the scouts were before they were attacked by Soraks. It remains an unknown location near the ruins of an ancient tower and is a Possible Sorak Base.

No Soraks were found but it looks like an excavation site full of workers, each with an identifiable A-shaped tattoo. It also appears a powerful wizard left behind his magic library. The Soraks were finally discovered here along with a guarded relic, a Crown.

Quests around the Manacalon Ruin:

NPCs around the Manacalon Ruin:

Merchants around the Manacalon Ruin: 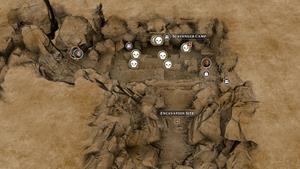 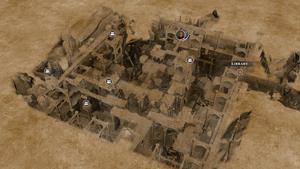 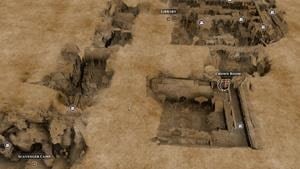