The Wizard's Lair | Solasta Crown of the Magister Wiki

The Wizard's Lair is a Secondary Quest from the Lost Valley DLC in Solasta: Crown of the Magister. Quests are different tasks and missions that a player can acquire and partake in throughout the game, quests are usually unlocked through the main campaign, during a series of events, or are given by certain NPCs. Completing a quest also grants various rewards that can aid the player throughout their journey. This is a Faction Quest from The Rebellion. Completing this quest will increase your relationship with The Rebellion.

Speak to Ellaria Anfarel in the Dinas Gessa Rebellion HQ.

There will be another travel point next to the Primal Wood exit that will still be northwest from where Ellaria is standing. Take the new travel point to reach the Wizard's Lair. If you chose to follow the Forge questline, this will take you to the same location as the Manacalon Riches.

Loot the shelves to obtain a number of books and Crafting options from the Library. There will also be a crate that will contain some spell Materials. Once you exit the door, be prepared for a battle against some Fire Osprey. You can stay out of their line of sight by remaining near the door area, but during the enemy turn, be prepared for their advances. Once you have cleared the fight, your objective will be cleared, Before you leave,  take the staircase up directly in front of the set of doors. Loot the chests on this upper area, that will later be labeled Laboratory on the map- to obtain the Silver Beetle Key amongst other loot. Once you are done looting the area, you can exit this location. 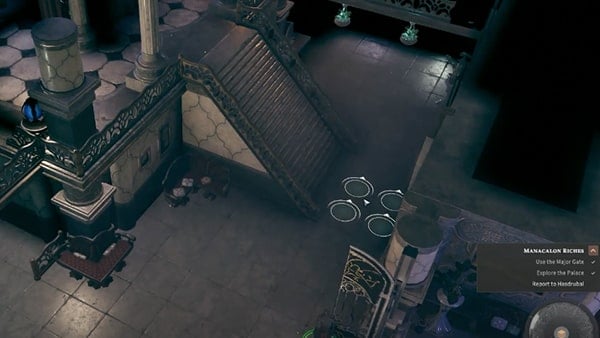 Exit this area and return to Ellaria Anfarel. Speak to her to complete the quest

How to obtain The Wizard's Lair

The Wizard's Lair Rewards and Loot