Join the Rebellion | Solasta Crown of the Magister Wiki

Join the Rebellion is a Secondary Quest from the Lost Valley DLC in Solasta: Crown of the Magister. Quests are different tasks and missions that a player can acquire and partake in throughout the game, quests are usually unlocked through the main campaign, during a series of events, or are given by certain NPCs. Completing a quest also grants various rewards that can aid the player throughout their journey. This is a Faction Quest from The Rebellion. Completing this quest will increase your relationship with The Rebellion.

A Woman in Red

Complete Rebel Outpost and speak to Sima Temple in the Caer Hyfryd Inn to activate the quest.

A Woman in Red

Sima tells you to go to the Temple and talk to the woman in red. You can fast travel to the temple, and you will also see her marked with the quest icon on the map. Her name is also Red. This will unlock the Buried City that will later be revealed as Dinas Gessa. Leave Caer Hyfryd and travel to Dinas Gessa.

Travel to Dinas Gessa. Unlike if experiencing this location from Meeting the Rebellion, this quest will come with a direct entrance called Rebel Shortcut Entrance. Enter this location through here. 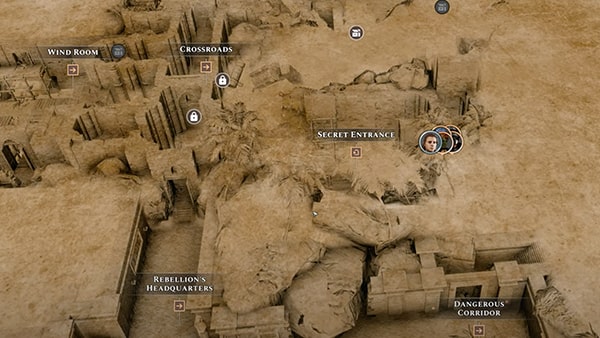 Take the path southeast and at the fork, head northeast to meet Ellaria Anfarel. This will complete the quest.

How to obtain Join the Rebellion

Join the Rebellion Rewards and Loot